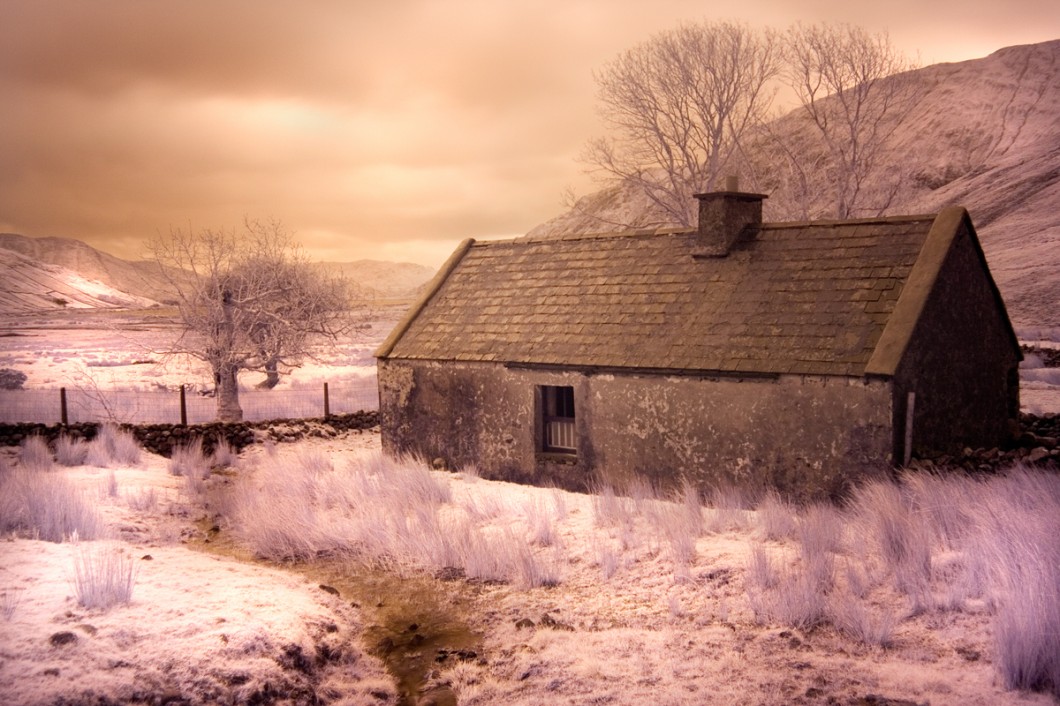 This photograph of an abandoned cottage was taken in Joyce County near the shores of Lough Nafooey in the Partry Mountains.

When I came across the cottage it evoked the chilling story of an infamous event which took place in nearby Maamtrasna. In what was to become know as the Maamtrasna Murders, five members of the Joyce family were brutally killed in their home in an isolated valley in August 1882. The killings were said to have been carried out by a secret Ribbon Society apparently motivated by a bitter personal feud over grazing rights and the suspected theft of a sheep. The horrific nature of the killings shocked both Ireland and England and eventually helped bring down the Gladstone Government in Westminster

In the subsequent police investigation ten men were arrested based on evidence given by three witnesses. Many of those arrested were related to either the murdered family or to the witnesses. The prisoners were transferred to Dublin where they were to face trial in front of a mainly middle class and unionist jury. The case was conducted in English, a language which none of the Irish-speaking accused prisoners understood.  The Crown Solicitor managed to get two of the accused men to turn state witnesses and this resulted in three of the accused being sentenced to death; Myles Joyce, Pat Casey and Pat Joyce. These men were hanged In Galway Jail on December 15, 1882.

In an attempt to save their lives the remaining prisoners all pleaded guilty and were sentenced to long prison terms. Two of these prisoners died in jail, while the other three were released following the completion of their sentences over 20 years later. It is widely regarded that several of the accused men, including at least one of those who were hanged, were innocent of all changes. As he faced the hangman's noose at Galway Prison, Patrick Casey, one of the accused, signed a declaration before the prison Governor, stating that
"as a prisoner under sentence of death…. Myles Joyce is innocent in this case."

The case was repeatedly raised in the English House of Commons. When the then Prime Minister Gladstone refused an inquiry, Charles Stewart Parnell, the leader of the Irish Parliamentary Party, withdrew his support for the Liberal government which led to its defeat.  To this day the case remains highly divisive and the worst mass murder in Irish history.

1. Do I need a PayPal account to make online payments?

Towards the bottom right of the PayPal log-on window there will be a link for customers who don't have a PayPal account. By clicking "Don't have a PayPal Account" at this point, you can complete your purchase with your credit card in the normal fashion

Image Framers (Adelaide St Sligo) look after all of my framing needs.

My photographs are first hot press dry-mounted and then remounted on Arqadia acid free conservation mount board before being placed behind 2mm float glass. The backing board used has a built in acid free liner and moisture barrier to offer the highest protection for your photograph.

The frame and mount have been selected to best suit each individual photograph and image size.

DigiCreatiV use fade resistant Epson inks which are UV stable ensuring your prints lasts for 60+ years. The images are printed on an Epson Stylus Pro 9900 printer using a colour calibration processes incorporating a spectroproofer and specialist software.

All of the photographs displayed in the Gallery pages can be bought directly though this website.

To purchase a photograph, simply select the quantity and size of photograph you want to buy and then click the 'Add to Cart' button.  When you are finished shopping you can then click the ‘Proceed to Checkout’ button

Photographs can be purchased from this site using the PayPal Payment system.

Towards the bottom right of the PayPal log-on window there will be a link for customers who don't have a PayPal account. By clicking "Don’t have a PayPal Account" at this point, you can complete your purchase with your credit card in the normal fashion

Photos in a tube are delivered through the standard postal system.  Framed photographs and canvas prints will be delivered by courier.

Orders will be dispatched within 10 working days (they will usually be dispatched quicker than this but may take longer if the prints aren’t in stock or have to be framed). If your order is urgent please contact me directly to get a better estimate of delivery times.

Canvas prints will take 10 -15 working days for delivery.  Canvas prints are also available in sizes other than the default ones offered on this website (up to 3 meters wide for Panorama photographs). Please contact me directly for quotes.

If you are making a purchase using a promotional code you just need to enter the code at the checkout.

Only one code can be used per promotion per customer

If you have any query that hasn’t been answered on this page then contact me directly.